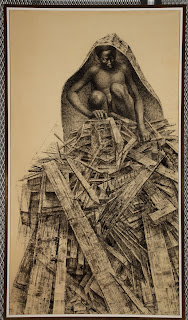 One of the successful strategies employed by the mainstream modernism of the 20th century to marginalize anything that threatened its hegemony was the myth of “art for art’s sake.” Art was supposed to be “about” nothing but itself, an internal system of references that seems, in retrospect, to be shamefully smug and self-congratulatory. This was one of the thoughts that leapt to mind as I walked into the exhibition Now Dig This: Art &amp; Black in Los Angeles, 1960 — 1980, and found myself in a gallery surrounded by the powerful work of an old friend, Charles White. I have a story to tell about Charles White and racism: my own.

I arrived, as Dean, at what was then Otis Art Institute of Los Angeles County (now Otis College of Art &amp; Design) in 1976. Charlie, as he was universally known, had been there for some years as the leading teacher in the field of drawing. I had known nothing of his work before I met him, but soon we were good friends, enjoying a Mexican lunch together a couple of times a week across the road from the campus — along with the usual three lunch-time martinis. Nobody thought to question the artist’s intake of alcohol in those days. In the course of those lunches, Charlie proved not only a good friend; he was a confidant and a loyal ally at a time when the school was threatening to fall apart.

I learned to respect his work slowly, and to learn a bit about his history; and on both of us leaving Otis at the same time — he for health reasons — I managed to snag a Rockefeller Foundation Fellowship for a book-length Charles White monograph. Setting out on a program of academic “research” as I had always known it — libraries, museums, prior critical reviews, and so on — I soon discovered that, in Charlie’s case, these resources were virtually non-existent. I instead spent many hours with the artist, in what turned out to be the last weeks of his life, creating an oral history to fill in some of the gaps. Then Charlie died (too young!), and the only recourse was to head out with my tape-recorder to locations all over the country, to talk to many of the people he had mentioned.

Though they were prominent in the history of mid-century African-American art, I was surprised — and not a little ashamed — to learn that I had never heard of them: artists, curators, historians, critics, archivists and museum personnel, they occupied a place below the level of what I had somewhat arrogantly presumed to be my knowledgeable purview. Their stories were universally fascinating, their accomplishments impressive, their integrity unquestionable. I had begun to discover the real meaning of what I had read about in Ralph Ellison’s justly renowned novel: invisibility. And I, a nice, white, liberal-minded person who had never conceived of having the smallest racist blemish in my nice, white soul, was forced to recognize that I had long been a collaborator in a kind of institutionalized, systemic racism that asserted the superiority of a mainstream that by and large excluded serious consideration, let alone inclusion, of the work of people of color.

Charles White was such an artist. From the beginning, his interest was in the various causes of social justice, especially in the cause of racial equality, and he chose to make his work as an artist “about” just that. His greatest works are those that celebrate the beauty and dignity of the African-American, heart, mind and soul, and honor the contribution of many in the relief of human suffering. Like “Birmingham Totem” (above) they also memorialize key moments in history. But they were figurative at a time when figurative art was summarily dismissed by the mainstream establishment; they unabashedly promoted a social and political agenda when art was not supposed to do that. And, let’s be frank and truthful, they were marginalized. When my book was finished and submitted for the consideration of agents and publishers, the responses I received had nothing to do with its quality; rather, they tended to cite a lack of sufficient public interest, an absence of clear commercial viability. I got the message. Be it noted that I did not have the same problem with my book about David Hockney, not long after.

I’ll have more to say about Now Dig This in a future post. Suffice it, by way of introduction, to say that it did my heart a lot of good to find Charlie’s work honored in its proper historical context. He was not only an extraordinarily gifted artist who produced powerfully moving and timely works of art; he was also a important pioneer who inspired a generation of young black artists to believe that they, too, had something of urgent importance to say, and that their voices warranted a hearing.

Peter Clothier is an internationally-known novelist, art critic, and blogger. A student of Theravada Buddhism, Peter hopes to use his online platforms to integrate compassion, non-attachment, and political engagement into our contemporary discourse, even as he gradually integrates those same qualities into his own life.

In addition to his Huffington Post blog, you can find Peter’s work on his daily blog, The Buddha Diaries and his monthly podcast, The Art of Outrage